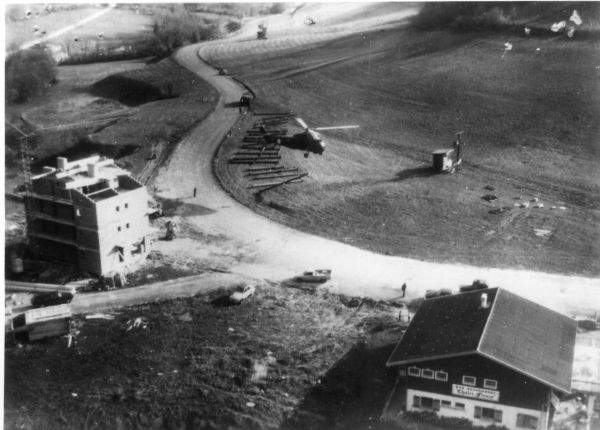 Christmas 1964 ... a date to remember. The village of Aillon-le-Jeune had started installing its first ski lifts which would become the resort of Aillons-Margeriaz. At the beginning the project was created to enable locals, farmers and forest workers to compliment their income in the winter and to prevent the rural exodus of the time.
Later in 1980, encouraged by the Conseil Général of the Savoie, Margeriaz saw the light of day with a programme to introduce school children to skiing.
Key dates marking the history

Birth and development of Aillon-station

Christmas 1964: The Aillon-le-Jeune town council decided to promote skiing by installing the first drag lift and the first chairlift near the Correrie. The resort was born.

1968: Creation of the road and car parks, installation of the Combe aux biches, Aigle and Crête drag lifts on Mont Pelat.

1970: The resort Aillons develops and has its first residential housing programme (Mense estate).
The installation of the still existing Margeriaz snow stadium

1980: Opening of a second ski area at Margeriaz with the help of the Conseil Général of the Savoie. This area was designed for families and especially children and also beginners downhill and cross country skiing.

1985: New installations on the Mont Pelat with the opening of the first stage of the chairlift.

1990: Mont Pelat is equipped with a second chairlift: the summit of the resort with exceptional panoramic views over the Combe de Savoie and the Maurienne Valley, now accessible to all. The sites of Margeriaz and Aillon-station join together: the SEM des Bauges becomes the sole operator of the two ski areas.

1991: Opening of the altitude restaurant "La Bergerie", in Margeriaz.

1996: Snow canons were successfully tested, improving the snow cover at the bottom of the slopes of the ski area Aillon-station.

1997: Installation of the high speed 4 man-chairlift at Roc de Balme at Margeriaz.

2007: Restructuration of the beginners ski area at Aillon-Station:  « Croés » draglift and the two level toboggan run. On line buying of skipasses began.